Symptoms of a Stroke 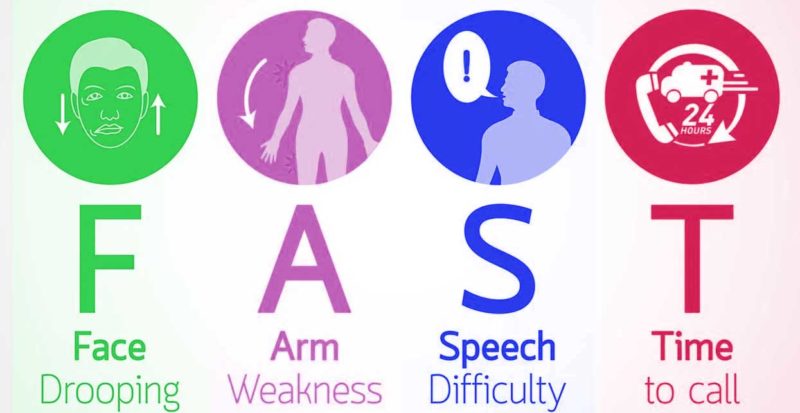 We should all learn to recognize and pay attention to the warning signs of a stroke. When blood flow to the brain is disrupted, every minute matters. A clot-dissolving medicine can be used to treat the most frequent type of stroke, but it must be started within three hours to be successful.

How can I tell whether my loved one is experiencing a stroke if he or she appears to be in distress?

The acronyms F-A-S-T and 9-1-1 are used by the Stroke Association:

I’m experiencing some dizziness. What are the symptoms of a stroke?

According to the American Stroke Association, the following are the important warning signs:

What should I do if these symptoms occur?

Even if the symptoms are relatively temporary, dial 911 right away because a stroke is a medical emergency. If necessary, have someone else call an ambulance or rush you to the nearest emergency room. (If you are unable to communicate and are alone, many emergency dispatchers have address identification; simply dial 911 and keep the line open.)

You should sit down in a comfortable area because a lack of feeling in your legs could cause you to fall. If you’re with someone who might be having a stroke, gather his medications and medical information to go to the hospital with you.

Other disorders, such as low blood sugar in diabetics, are similar to a stroke. Follow your doctor’s earlier directions on how to raise low blood sugar if you have diabetes. To raise your blood sugar, the American Diabetes Association recommends eating or drinking 15 grams of carbohydrate, such as half a cup of fruit juice, 5 to 6 pieces of hard candy, or 3 glucose tablets. “Low blood sugar can mimic a stroke, and it’s not a good idea to wait if the body isn’t getting the sugar it needs,” says Andy Jagoda, MD, an emergency medicine professor at Mount Sinai’s Icahn School of Medicine and a member of the National Institutes of Health’s Brain Attack Coalition.

When the ambulance arrives, what will happen?

You ought to be in capable hands. Paramedics will examine your vital signs and gather as much as they can about your medical history and prescriptions while driving you to the hospital. They’ll check your breathing and listen to your lungs and heart, as well as test your blood pressure and give you oxygen. You’ll probably be hooked up to a heart monitor and have a blood test done on your finger.

A simple neurological exam may be performed by paramedics to look for signs of stroke, such as difficulty speaking or paralysis in the arms or legs. Whether they ask or not, you should tell them when the symptoms started and share that information with the hospital’s doctors. This is crucial since some therapies are only effective if given within a specified time frame.

What if it turns out I didn’t suffer a stroke after all?

A transient ischemic attack, sometimes known as a “mini-stroke,” can happen to you (TIA). These mini-strokes occur when blood flow to a part of the brain is temporarily blocked or slowed; they have the same symptoms as a stroke but don’t have the same long-term consequences. TIAs, on the other hand, is frequently a sign that an artery is vulnerable, such as constriction or partial closure. Mini-strokes are also common before a stroke that causes permanent damage; up to 30% of ischemic strokes happen within a month of a TIA. Early detection and treatment of a TIA may help to prevent long-term damage from a stroke.

Another key reason to pay attention to such symptoms is that they could be a sign of an oncoming artery rupture or hemorrhagic stroke. A small quantity of bleeding from the compromised spot may cause a sudden unexpected pounding headache, loss of speech, or other stroke symptoms before the artery breaks. If you recognize the signs and symptoms of a stroke, you’ll be much more likely to see a doctor who can find the compromised blood arteries and repair them before the artery ruptures.

The American Stroke Association is a non-profit organization dedicated to preventing http://www.strokeassociation.org 888-4STROKE is a toll-free number that connects you to (888-478-7653)

The American Heart Association is a non-profit organization dedicated to http://www.americanheart.org

The National Institute of Neurological Disorders and Stroke is a federal agency that studies neurological disorders and strokes. http://www.ninds.nih.gov NINDS, the nation’s top funder of scientific research on brain and nervous system disorders, has the most up-to-date information on stroke research.

The National Institute of Neurological Disorders and Stroke is a federal agency that studies neurological disorders and strokes. What You Should Know About Strokes. http://www.ninds.nih.gov/disorders/stroke/stroke needtoknow.htm

The American Diabetes Association (ADA) is a non-profit organization dedicated to Hypoglycemia. http://www.diabetes.org/type-1-diabetes/hypoglycemia.jsp