WHAT IS THE DIFFERENCE BETWEEN THE COVID-19 VACCINES FROM MODERNA, J&J AND PFIZER? 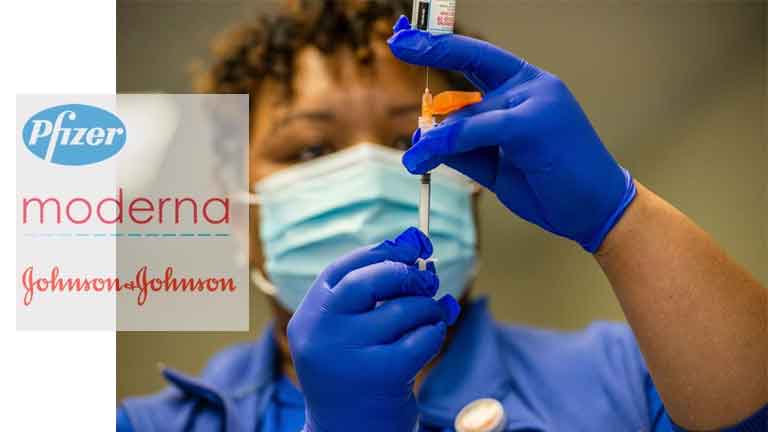 A pandemic vaccine could be administered in a single shot in an ideal future, enabling stocks to be stretched to reach a vast number of people. It will have no more serious side effects than a sore shoulder. It would also be quick to ship and store.

One such vaccine is now available.

The Food and Drug Administration released an emergency usage authorization for Johnson & Johnson’s one-dose Covid vaccine on February 27. In a multi-country analysis, it was shown to be 66 percent safe against mild to serious Covid infection. It was developed by J&J’s vaccines division, Janssen Pharmaceuticals. It was also 85 percent effective in preventing the spread of serious disease. In addition, no one in the vaccine arm of a major clinical trial was hospitalized or died.

Please keep in mind that as vaccines are first being rolled out, people are unlikely to be given a choice of vaccines. There aren’t enough materials. You can obtain the vaccine that is available at the site where you are being vaccinated.

The Pfizer and Moderna vaccines are made with messenger RNA (mRNA), a technology that delivers a small amount of genetic code to cells, essentially a formula for making the SARS-2 virus’s surface protein (known as a spike). The proteins generated using the mRNA instructions train the immune system to recognize the spike protein as foreign and create antibodies and other defense mechanisms to combat it.

The J&J vaccine takes a particular approach to instilling the SARS-2 spike protein in human cells, which then activates an immune response. A viral vectored vaccine is what it’s called. The genetic code for the SARS-2 spike protein has been engineered into a harmless adenovirus, which belongs to a wide family of viruses that includes those that cause common colds. The adenovirus uses this code to make spike proteins once it reaches cells. J&J used a similar method to develop an Ebola vaccine that was approved by the European Medicines Agency.

Population to be targeted

At least in the early stages after vaccination, the Pfizer and Moderna vaccines have demonstrated astonishing — and virtually similar — levels of efficacy.

After two doses, the Pfizer vaccine was found to be 95 percent effective in preventing symptomatic Covid infection. The vaccine tended to protect people of all ages and races and ethnicities in nearly equal quantities.

After the second dose, the Moderna vaccine was 94.1 percent effective in preventing symptomatic Covid-19. The vaccine’s effectiveness appeared to be marginally lower in people 65 and older, but the company clarified that the figures may have been skewed by the fact that there were few cases in that age group in the study during a presentation to the FDA’s advisory committee in December. The vaccine tended to work fairly well in people of various ethnic and racial backgrounds.

However, comparing the effectiveness of such vaccines to Johnson & Johnson’s is problematic due to discrepancies in the Phase 3 clinical research designs — the studies were basically testing for different outcomes. Both Pfizer’s and Moderna’s trials searched for some symptoms of Covid infection. Pfizer began reporting cases seven days after getting the second dose of vaccine, while Moderna did not begin counting cases until day 14.

J&J, on the other hand, decided to see whether a single dose of its vaccine could protect against moderate to serious Covid illness, which was described as a positive test plus at least one symptom like shortness of breath, starting 14 or 28 days after the single shot. (The firm gathered the information for both.)

Direct comparisons are complicated due to the variations in the trials. It’s like comparing apples and oranges. Pfizer and Moderna vaccines were also tested prior to the advent of alarming new strains in the United Kingdom, South Africa, and Brazil. It’s uncertain how effective they’ll be against these mutated viruses.

As the variants started to circulate, the J&J vaccine was still being studied. Most of the data obtained in the J&J trial’s South African arm came from people who were infected with the B.1.351 variant, which was first seen in South Africa.

However, the vaccine was found to be 85 percent effective against serious disease in all eight countries and three regions studied, as well as across age groups for trial participants. After the 28-day period in which immunity grew, there were no hospitalizations or deaths in the vaccine arm of the study.

It’s uncertain if any of these vaccinations will prevent asymptomatic SARS-CoV-2 infection. It’s also uncertain if vaccinated people will spread the virus if they get infected but don’t show symptoms.

Number of vaccine doses/amounts per dose

Pfizer’s vaccine contains 30 micrograms of vaccine per dose. Moderna preferred a much higher vaccine dose of 100 micrograms. It means the company uses about three times the amount of vaccine per person as Pfizer. Despite this, they are not seeing better results. Moderna has been requested by the government’s vaccine development program, formerly known as Operation Warp Speed, to see whether it can reduce the dosage of its vaccine without losing its efficacy.

As previously mentioned, the J&J vaccine is a one-dose vaccine. The business is also experimenting with a two-dose regimen, with the two injections separated by eight weeks. The results of the 30,000-person trial will not be available until May. The single-dose produces more antigens than the two-dose regimen’s individual doses.

Profile of side effects

Shots that cause a wide variety of transient side effects in a large number of recipients are referred to as reactogenic in the vaccinology environment.

Both of these vaccines fall into the reactogenic group, as do the majority, if not all, of the Covid-19 vaccines that have reported data so far. The Advisory Committee on Immunization Practices, an expert group that advises the Centers for Disease Control and Prevention on vaccination policies, told hospitals early in the rollout that they may want to stagger vaccinations among workers in case some were too sick to function the next day.

Injection site discomfort, nausea, headache, muscle pain, and joint pain are the most common side effects. Fever has been confirmed by some participants in the clinical trials. After the second dose of the Pfizer and Moderna vaccines, side effects are more frequent. Younger adults showed more side effects than older adults, owing to their stronger immune systems.

To be clear, these symptoms are an indication that your immune system is working overtime. They don’t imply that the vaccine is dangerous. There have been no significant long-term side effects associated with getting these vaccines so far, but their use will be closely monitored as it develops.

The mRNA vaccines have been related to serious allergic reactions. Anaphylaxis, a serious and possibly life-threatening reaction, tends to be caused by both the Pfizer and Moderna vaccines on rare occasions. People who develop anaphylaxis must be treated with epinephrine, the medication used in EpiPens, and will need to be taken to the hospital to keep their airways open. People should be monitored for 15 minutes after receiving a Covid-19 injection, and 30 minutes if they have a history of serious allergies, according to the CDC.

A single case of anaphylaxis has been documented in someone who received J&J’s vaccine, according to the company.

The mRNA vaccines necessitate a complex cold chain, which refers to the conditions under which vaccines must be stored during delivery and when they are being distributed in doctors’ offices, hospitals, and public health clinics.

The J&J shot does not, which ensures that if stocks are sufficient, this vaccine can be administered conveniently anywhere — in physicians’ offices, pharmacies, mass vaccination centers, and public health clinics. It can be kept for at least three months in a normal refrigerator at room temperature.

Pfizer’s mRNA vaccine was initially the most difficult to use. It had to be transported and held in ultra-cold freezers capable of holding the vials at -94 degrees Fahrenheit. However, the FDA recently announced that the vaccine can be delivered and kept at regular pharmacy freezer temperatures, between -13 and 5 degrees Fahrenheit, for just two weeks. That should make the final stage of the vaccine’s journey from the manufacturing plant to the syringe ready to inject into a patient’s arm a little less challenging.

Modernas must be shipped at a temperature of -4 degrees Fahrenheit, which is the same as a typical refrigerator freezer.

It will take time to decide how long all of these vaccines’ safety will last. It would mean taking blood samples from certain volunteers on a regular basis to assess their antibody levels, though a reduction in antibody levels does not always indicate a loss of safety.

However, a significant part of this work would include keeping an eye out for evidence that people who have been immunized are contracting Covid in greater numbers, a trend that will almost certainly lead to recommendations for booster shots at some yet-to-be-determined interval.